Brighid – Goddess of Swans and Poetry

Brighid, Bride, or Saint Brigid, as She is known, seems to me to be one of the most revered goddesses in the Celtic pantheon. For Her, an eternal flame is kept burning by the Brigantine Sisters in Kildare, and Mara Freeman (2001: 47) goes so far as to call Her the closest we have to an Irish mother goddess.
However, I have never felt a close connection to this goddess. So when I decided on reading up on Her and Her associations, I found that some of the animals and functions commonly associated with Her, e.g. the swan and poetry, are attributes of the goddess Anann for me. Hence, in this post I will try to clear up my confusion about these two goddesses. I will focus mainly on Brighid’s associations with swans and on Her function as a goddess of poetry.

An online source dedicated to Her describes Brighid as the “White Swan.” This connection is also made in a poem by Robert Graves, where She says:
“Black the town yonder,
Black those that are in it,
I am the White Swan,
Queen of them all“ 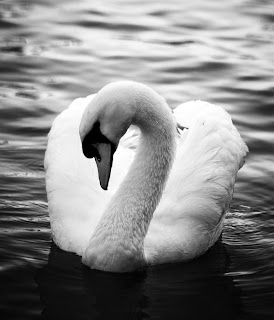 Apart from these hints, Brighid’s association with swans may be due to the fact that swans return from their winter habitats around the time of Imbolc, which again is Lá Fhéile Bríde, or Brighid’s Day. Swans further represent the connection between land, sea and sky, since they abide on land which is close to a body of water and, being birds, they can rise up to fly.
For the Druids, the swan was a representation of the soul and was believed to assist with travels to the Otherworld. The swan is also sacred to the Bards, whose cloaks were made of swan feathers.
This ties in nicely with Brighid being the goddess of poetry granting the “fire in the head” of poetic inspiration. Thus, it strengthens the claim that Brighid and swans are closely connected.


For me, the connection of swans and poetry is intuitively clear. Not only do swans reside at liminal spaces where the land and the waters of inspiration meet (again an association with Brighid as the goddess of wells and healing), but they are also referenced as being mystic and poetic animals in popular songs, such as those of Marc Bolan, who I greatly admire:

“Wear a tall hat like a druid in the old days
Wear a tall hat and a tattooed gown
Ride a white swan like the people of the Beltane
Wear your hair long, babe you can't go wrong.”
Ride a White Swan - T. Rex 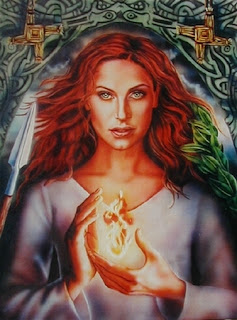 However, while I myself have written numerous poems featuring swans and the liminal space of the seaside, I have never felt the divine spark of inspiration as coming from Brighid. Rather, I feel that my matron goddess Anann, who represents the land aspect, and my patron Manannán, whose realm is the sea, are both inspiring me to write. Yet as there is textual evidence for Brighid being the goddess of poetry, I shall try and listen more closely next time I feel compelled to compose a poem.

Further, when I read enquiries about Brighid and swans in an online forum, the general consensus seemed to be that although the facts seem convincing, there is hardly any evidence for this connection (evidence here meaning ancient textual sources). But  obviously, as I only started researching Brighid, it is possible for me to have overlooked such a textual source. So my conclusion in this area will be to keep researching this detail.

Another fact that I found interesting while researching Brighid is that of Her green mantle which gave Ireland its green colour. Intuitively, for me, green is associated with Anann. She is a goddess of fertility and of the land, hence green, the colour of fresh leaves and grass, seems to sit better with Her than with a goddess of fire and water. So I am wondering whether Brighid at some point was conflated with a land goddess or whether Christian influence had anything to do with the colour green being associated with Her.

So, as a tentative conclusion for me, I can say that while the connection between poetry and swans is clear now, the person of Brighid has not become more tangible during my research; hence, it will need further reading to figure out my introductory questions concerning Brighid and Anann. Yet since Brighid has been turned into a saint, for me it seems difficult to assess which of Her attributes and associations are truly pagan in origin and which stem from Christianity.