Welcome to the Mists

Dia duit, dear traveller, and welcome to the Mists of Manannán.

Rest here for a while and partake of the feast of Eamhain Abhlach, the Apple Island. Listen to tales of yore that tell about our ancestors and our Gods. Hear the bard sing praise of the Tuatha Dé Danann. Perhaps, you’ll find some delicious treats which strike your fancy. Or you might feel inspired to join in the discussions about the Celtic soul.

But first, before we can embark on our journeys down the Celtic path, let me introduce myself.
I call myself Harzgeist; this is the German for “ghost of the Harz mountains.” The Harz mountains are a region in the middle of Germany - Lower Saxony, to be precise - where I was born and raised.
The area has long been famous for its magic. Here, the old lore is still very much alive. The German poet Johann Wolfgang von Goethe attested in one of his plays that witches still met at the Blocksberg, or Brocken, the highest mountain in the Harz region. 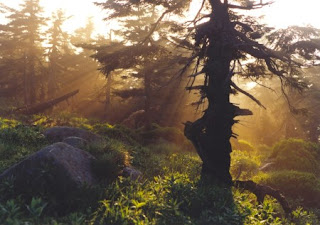 In winter, Odin’s Wild Hunt is said to pass over the hills and mountain ranges and you have to be careful not to be spotted by the Hunters, as they will carry you away with them to some unknown realm from which you might never return. Other lore also attests to the presence of a belief in the Germanic Gods, like the Woden’s Oak that can be found in the woods around my hometown, or the Oak of Justice, where justice was spoken and condemned people hanged in the not-so-distant past.
I grew up with old tales told by my mother; tales that are still whispered by the fireside. Tales of monks haunting silver mines; stories about small towns named after a huge, strong wild man who was said to have lived there a thousand years ago when the first mines started to yield ore; tales of the devil and of those cunning enough to trick him, too.

Naturally, I was always fascinated by the supernatural. Nature held and does still hold a great fascination to me. You can find me outside in a rainstorm anytime, praising my gods, rejoicing in the pure water cleansing me. But it was not until a friend lent me Scott Cunningham’s Wicca for the Solitary Practitioner that I started truly walking a Pagan path. I kept reading widely, from the classics like Gardner and the Farrars to A.J. Drew’s Wiccan Bible and a lovely book called Raising Witches. However, I remained – and still remain, unfortunately – solitary in my practice as I didn’t find like-minded folk in my area willing to practice with me.

Now, four years after reading Cunningham’s book for the first time, I reside in a place close to Heidelberg, where I studied German and English literature and linguistics as well as Psychology. I am currently planning on doing my PhD on ‘Cross-Cultural Impoliteness in Children’s Literature’ and just started walking a path more oriented towards the Celtic pantheon.
As not to let my spiritual side wither while I embark on a scientific career, I decided to join in on the Pagan Blog Project. So for the next year, come and join me on the Mists of Manannán each Friday to travel further into the mists.