Belief - Coming out of the Broom Closet

And the hills they are hollow, and home to the fae
Who dance on Midsummer’s eve
Some people don’t understand when I say
These are the things I believe.
The Hills they are Hollow – Damh the Bard


Last week, I was sitting in the pub with a friend of mine. We had exchanged belated Christmas presents a week before; she had given me a lipstick I had coveted for some time, while I had bought her a bookmark showing the Christian fish symbol, since I knew she is Christian and because she is starting to work as a teacher and is going to need devices to keep track of information.
We then came to talk about this present I gave her, and about religion in general (I should add that we only met half a year ago, so we haven’t had many deep conversations about this topic). Then, presumably because my husband is atheist, my friend asked whether I was an atheist, too.

While I am fairly certain about my faith, at first I had problems answering. In an English context, I would probably have said that I am a pagan, but the term is used too little in Germany, and I felt that I’d need too lengthy an explanation about what kind of practice this involves. For Germans, Wicca is a better-known term, let alone through TV shoes like True Blood, but a proper understanding of the term is still fairly poor, and further, I don’t see myself as a Wiccan, so using this term would not really have helped me. In the end, I resolved to simply say no, I’m not an atheist, but am still not happy with it and feel like I owe my friend a proper answer.

So for this post, I plan to sketch in rough terms what I believe and what I aspire to be. As this post is mainly intended for my friend, I will gloss over some areas; people who’d like to know more should check the references at the end of the post that will lead them to more in-depth resources.

Now to my belief. I see myself as a practitioner of a branch that is referred to as Celtic Reconstructionist (CR). The term CR refers to “a polytheistic, animistic, religious and cultural movement. It is an effort to reconstruct, within a modern Celtic cultural context, the aspects of ancient Celtic religions that were lost or subsumed by Christianity” (http://paganachd.com/faq/); so, in essence, CR is a “re-creation of ancient Celtic pre-Christian religious and cultural practices” (http://www.ecauldron.net/reconcelt.php). Celtic in this context comprises the countries or parts of countries Ireland, Scotland, Wales, Isle of Man, Cornwall and Brittany (Kondratiev 2003) who all share related languages and cultures. My emphasis here lies with the Irish nation, its culture and language past and present; I’ve even studied Irish for a year (although my skills and pronunciation are sometimes way off the mark).

Since the question of CR is how Celtic religion would have developed without Christianity, a practitioner of CR tries to find answers by checking resources available to them. These are historic texts and those dealing with mythology as well as archaeological information on the pre-Christian period, addressing questions such as how the Celts brought offerings before their gods. This approach is by necessity quite scholarly in nature, but obviously studying history is not all there is to it (otherwise we could simply get an MA in history). Yet, weighing our sources is important to get a proper working basis for our own practice.
However, not every facet that is of interest nowadays can be verified by archaeology and ancient lore. This is where the concept of UPG, or unverified personal gnosis, comes in. The term refers to insight gained through visions, meditation etc. that is in keeping with the lore. If, for example, Zeus was imagined by one practitioner as protector of healthy, loving marriages, I’d be suspicious since it disagrees with all that is known about Him.
Now that we’ve explained the “what,” let us progress to the “who” of CR.

In my worship, I focus on the Irish pantheon. For me, the gods are beings with distinct characters and personalities, hence, to use the technical term, I am a hard polytheist. There are too many Irish gods and goddesses to go into detail here, so I’ll just focus on those that I have a connection to: Anann and Manannán Mac Lír.

As stressed in my “A” post, Anann is an Irish earth and mother goddess, who is associated with the green fertility of the land. Manannán, on the other hand, is the Irish god of the Ocean (ir. lear means “water”), of storms and of magic (for more information on Him, see source below). Anann and Manannán Mac Lír, then, are my matron and patron god – my “god mom and god dad,” so to speak. What these terms mean is that these are the gods who have chosen me to work with them. They have made this more than clear. I’m not prepared to go into detail here, but usually this can happen, say, in a vision, during meditation, or when you realize you keep coming across a symbol or animal associated with them in greater frequency than is normal for you and/or the time of year. Matron and patron gods, then, foster you, help you grow, and give you hints when you can’t see the wood for the trees.

Apart from Anann and Manannán, I also have a relationship with Thor, the Norse thunder god, whose presence feels like He is my “god older brother.” This is not strictly CR, as Thor does not stem from a Celtic pantheon, but I shall address this issue in another post.
As in Christianity, then, in CR you can have personal contact with the divine through prayer, meditation etc. 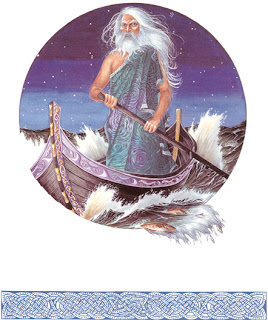 While praying is a highly personal way of getting into contact with the divine, throughout the year there are eight festivals that are celebrated by CR practitioners.
The festivals of Samhain, Imbolc, Bealtaine and Lúghnasadh are the major ones in the Celtic calendar. Being earth festivals, their focus lies on the tribe and its interaction with the land through agriculture (Kondratiev 2003: 110). Samhain marks the end of harvest, when the veils between the worlds are thinnest, and includes celebrations with ancestors who return to the living. Imbolc marks the period of the first lactation of ewes, when spring is about to come. At Bealtaine we celebrate nature and abundance, and Lúghnasadh represents the outcome of the harvest and the high point of summer.

The other four festivals, i.e. the Winter Solstice, Spring Equinox, the Summer Solstice and  Autumn Equinox are sun festivals by nature and focus on the alternation of summer and winter. There is discussion if these four should be celebrated at all, since they are not attested for the ancient Celts; however, Kondratiev (2003: 111) stresses that they have now become part of a living Celtic tradition, e.g. Summer Solstice is celebrated in many Celtic countries as St. John’s Day. 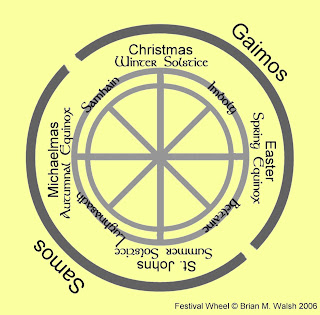 CR practitioners also focus on the phases of the moon, from its waxing period of growth and expansion to its waning state of stasis and recollection (Kondratiev 2003: 221). In the moon phases, as well as with the eight festivals, a mindset of polarity is apparent: the Celtic year starts at Samhain with a period of rest and breeding of new life in darkness, while the light half of the year brings life and the plans of the winter period to fruition (Kondratiev 2003: 79ff.).

As structured as this may sound, CR does not require of its participants to use certain established prayers, nor does it have a holy scripture. So while we try to adhere to practices handed down through the ages, we are fairly free to establish a contact with the divine that really suits our needs. 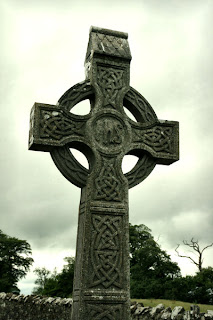 Concerning its stance towards Christianity, Kondratiev (2003: 63f.) stresses that pagan Celtic faiths and Christianity can and need to co-exist to fully re-create the Celtic ways. Through all his work for CR, Kondratiev remained a Christian until his untimely death in 2010. While Christianity is not a path that would work out for me, Christians and pagans need to respect each other to co-exist in a complete recreation of Celtic life as well as in the world at large.

Online sources:
http://paganachd.com/faq/ (an extensive list of q and a, covering all aspects of CR, e.g. theology, ritual, ethics, as well as common misconceptions and definitions)
http://www.imbas.org/ (site of a now-defunct CR organisation that holds interesting articles on topics such as Celtic gods or the Celtic peoples)
http://www.ecauldron.net/reconcelt.php (mainly a list of resources with a short introduction to CR)
http://www.celtic-nation.org/Lorekeeper_home.htm (an online course devised by Kondratiev, among others, as a study guide to get to know Celtic culture and spirituality)
http://www.manannan.net/ (a site dedicated to Manannán, with myths, personal stories, art and poetry)
Damh the Bard – The Hills they are Hollow: http://www.youtube.com/watch?v=TZIHAHj8ZcM