Blessed Imbolc!
Today was quite an important day since this was the first ritual I did since last year’s Midsummer, where I dedicated myself to my matron, Anann. And I have to admit that without the blog project, which really got me thinking about my spirituality, today’s ritual probably wouldn’t have happened, so thank you Rowan for giving us this great chance!
And second, today was the first ritual I did in a – more or less – Celtic format. I’m still a bit overwhelmed by the beauty of it. For me, this framework works much better than the Wiccan one I’ve been using before, and now I’m fairly sure that I’m on the right path.
Also, I discovered that using Irish when addressing my gods helps me to feel closer to Them. However, I really have to brush up my Irish – I kept addressing Manannán as “mo mháthair,” which means “my mother” in English... but I had the feeling that He was quite amused when I realized it, laughed out loud and finally referred to Him – correctly this time – as “m’athair,” “my father.”
But now to the pictures of my altar: 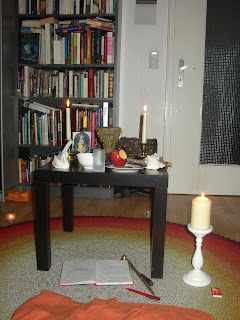 Usually, my altar sits in the bedroom, but today I chose to hold my ritual in the living-room on the beautiful sun carpet my husband’s grandma made for us. Around the carpet I placed nine candles (I guess watching The Craft influenced me a bit here). It created a beautiful atmosphere, although I was afraid that I’d set my white dress on fire any minute (so as a note to self, I really need to make a decent, non-flowy robe), and although during my greeting to the nature spirits, one of the glass candle holders burst. I decide to read this as a sign that the spirits were indeed present ;-) 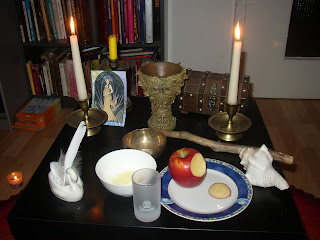 front: The little porcelain swan on the left is my symbol for Anann (She is also represented in the picture leaning against the candle). In the front, I’ve placed my offerings: cornmeal for Anann,  the best gin I own for Brighid and an apple for Manannán. The sea shell is a fairly recent addition; Manannán only entered my life a short while ago.
middle: a bronze bowl I use for burning incense, my wand (found by my little brother when he was out playing), and my candles.
back: my chalice, a candle-holder with my “working candle” (this one I use as a tidying-up spell, which is why it isn’t lit), and my treasure chest; originally it was a my great-grandma’s jewellery box, but I use it now for storing my incense.