Giamos and Samos – Celtic Worldview I

For my first “G” post in the Pagan Blog Project, I’d like to address one of the fundamental distinctions in the Celtic world, namely that of giamos and samos.
In the Celtic mindset, we can see a primary guiding concept of universal duality; in the words of Alexei Kondratiev, one of my favourite scholars in the field, this duality can be expressed as “Day and Night, Summer and Winter, God and Goddess, Tribe and Land,, this world and Otherworld” (Kondratiev 2003: 79).
It is the differences between these principles that allow changes to occur (Kondratiev 2003: 80). In this case, the Celtic worldview seems to be similar to the concepts of Fire and Ice in the Northern mythology, since the contact of both these elements created Ymir, the first living being (Prose Edda, 4).
Kondratiev (2003: 88) agrees when he notes that “fire and water are of primary ritual importance in Celtic tradition, representing the polarity of samos and giamos.” So maybe the similarities between these concepts will help me incorporate more Northern elements in my practice to honour the Northern gods I follow.
But now to the topic of my post:
The Celtic year is separated in two halves: giamos and samos; Freeman (2001: 5) refers to this as gam and sam, but her distinction is essentially the same. The terms were developed by Neven Henaff, a Breton nationalist thinker of early 20th century (Kondratiev 2003: 79).
The giamos period encompasses the time from November 1st to May 1st and is thus the Night or Winter half of the year. The period represents the Goddess, the land, the dead, as well as all unconscious activity (Kondratiev 2003: 81). According to this definition, rituals should begin after sunset – apart from those that are specifically designed or required to be held during daylight, such as Bealtaine (Kondratiev 2003: 87).
The samos period, on the contrary, is understood as the Day or Summer  half and goes from May 1st to November 1st; it represents the God, the tribe, the living, and all conscious activity (Kondratiev 2003: 80). 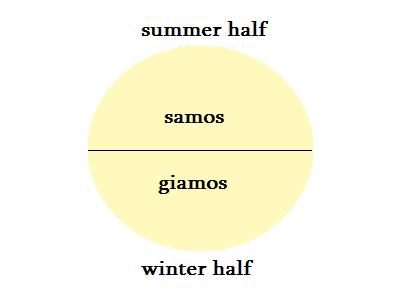 For Celtic peoples, the year started with the giamos period at Samhain, since “unconsciousness precedes consciousness, an unseen gestation of the womb precedes birth, and so Winter is felt to be the gestation of the Summer” (Kondratiev 2003: 97); likewise, days start at sunset. We can thus see that all time structure can be divided according to the samos/giamos principle. The concept also pertains to space, where South is equalled with Night and North with Day (Kondratiev 2003: 80). However, we’ll go into more detail once we reach “Q” for quarters.
Looking at the four seasons that we know and celebrate today, we can say that Spring is the samos- or summer-oriented half of the giamos (winter) season – Spring still belongs to the Winter half of the year, but we feel that the sun is getting warmer and flowers start to bloom. On the other hand, Harvest is the giamos (winter)-oriented half of the samos (summer) season), because the days are getting shorter and it is already getting colder, although the Harvest belongs to the Summer half.
This gives  us the following calendar of festivals:
o       Samhain at the beginning of Winter
o       Imbolc at the beginning of Spring
o       Bealtaine at the beginning of Summer
o       Lúghnasadh at the beginning of Harvest
During the time from Samhain to Bealtaine, we witness changes within the land – snow falls, then covers the earth during the Winter Solstice, and thaws again to allow new flowers and new life to grow.
In the time from Imbolc to Lúghnasadh, however, we witness changes pertaining to the tribe, i.e. humans, and the land, since it includes the time of sowing, growing of crops, and the harvest (Kondratiev 2003: 109).
The concept of samos and giamos can also be found in the ritual rivalry between the two consorts of the Goddess – the Maponos figure and Cernunnos.
In Celtic belief, Cernunnos is not seen as a horned god, but as a god with antlers – this is a necessary and important distinction, since antlers fall off and grow back, and so represent natural changes (Kondratiev 2003: 105f.). During the summer half of the year, Cernunnos has lost his antlers (and thereby his consort and his creativity); he now is in his personal giamos-(winter) mode of contemplation. When the world turns to winter, Cernunnos is re-united with his consort the Goddess and his hence capable of active exchange which will renew the land (hence he enters his own summer/samos mode) (Kondratiev 2003: 108).
Looking at his rival, the Maponos, we can describe him as the “archetypal young lover” (Kondratiev 2003: 108), expressing vitality and youth. He is born by the Goddess at the Winter Solstice, then grows up to mate with Her on Bealtaine, and goes into the giamos (winter) mode together with the land, i.e. he is imprisoned or dies as the year progresses, to be freed or reborn at the Winter Solstice (Kondratiev 2003: 109). 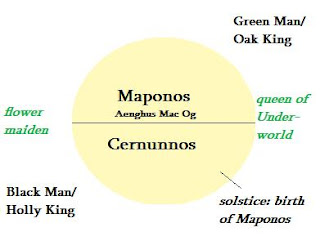 Wiccans might be familiar with this system in the form of the Holly King (similar to Cernunnos’s role) and the Oak King (the Maponos figure ruling through the summer period). This distinction is beautifully expressed in Damh the Bard’s song Noon of the Solstice, which can be found here.
My final question is whether we can work with this mindset outside of rituals and magical workings, since people do get confused when I wish my Wiccan friend a happy new year halfway through our annual Halloween party.
What do you think?
Blessed be,
Harzgeist
Sources:
Freeman, Mara. 2001. Kindling the Celtic Spirit. New York: HarperCollins.
Kondratiev, Alexei. 2003. The Apple Branch. A Path to Celtic Ritual. New York: Kensington.
Sturluson, Snorri. The Prose Edda. Accessed online (and in German) here.
http://www.asatruringfrankfurt.de/5edda/prosaedda_simrock/snorri_1-10_gylfaginning.htm
Damh the Bard – Noon of the Solstice: http://www.youtube.com/watch?v=mFvpMObnzB8
Eingestellt von Harzgeist um 01:17