England, or: Are the Gods Local?

Two days ago, I returned from a short trip to Nottingham, England. A very good friend of mine, who I shared a flat with in my year abroad, is in her final year now and I wanted to see both her and the city again, although the trip was overshadowed by family matters (let’s keep this short and simple: two weeks ago, the house my mum lived in burnt down. As of today, we still cannot enter the building and my mum’s staying at her parents with my little brother, our rabbit and the best dog in the world, who alerted her to the fire).
Before starting on the post, I have to stress that I moved to Nottingham in autumn of 2008, a couple months after I properly started researching paganism (my copy of the Farrars’ Witches Bible was the only book that came with me on the plane), and so the place will always have a magical connotation for me.
Visiting this time, I was staying with my friend in her tiny single room. As we’re not allowed to burn candles within the flats, I decided to do my weekly devotions for Thor by taking a walk through nature. The university has a beautiful campus with a small lake, where waterfowl (especially Canada geese) and squirrels abound; and there are many hidden gardens where you can sit and take some time out.
When I set out, the fog was still heavy over the lake, and I was instantly reminded of the Avalon books that I love. It would not have surprised me to see a boat with a priestess clad in dark blue garments appear in the fog. So possibly remembering the book series gave me this instant “Celtic” vibe that I’ll speak about later. 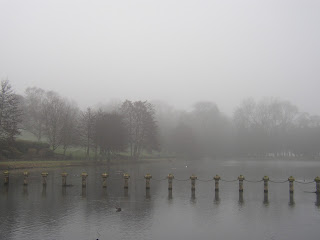 lake at the campus of the University of Nottingham
Walking on, I asked both Mr Squirrel and Mr and Mrs Goose to take some pictures of them, although neither came close as there were quite a lot of other people and dogs around for a foggy Thursday morning. 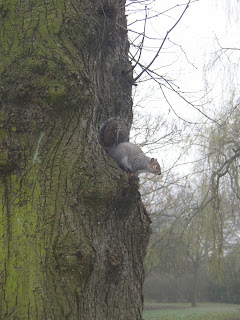 Mr Squirrel
So I decided to walk to a small circular garden that I’ve always loved (in case you’ll ever go there, it’s the Millennium Gardens behind the Law Building), where I thought I’d have some privacy. There are two labyrinths like the ones that you can find on the floor of churches like Chartres in France (a beautiful building, if you ask me), and I decided to walk them to get into a prayerful mindset. 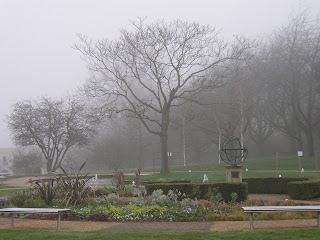 Millennium Gardens, campus of the University of Nottingham
Arriving at the round stone in the middle, I was planning on meditating on Thor and praising Him, but I found this very difficult to do. Instead, I felt instantly drawn to my matron, Anann. I remained in meditation on Her and the Summerlands for only a short while. There is a construction site for a hotel close by now and I hadn’t considered the through traffic and builders walking past. As I said earlier, maybe thinking of the Avalon series put me in a mindset that was better suited for praying to Anann, who is a Celtic Goddess, after all. But it also made me wonder, which brings me to the question of my post: are the gods local?
For me, it seems more easy to connect to my matron Anann – and my patron Manannán, for that matter; a heron was constantly visible while walking along the lake – while I’m in England. Possibly this is because I first met my matron while I was living in Nottingham, so the place and especially a certain area around the lake will always be associated with Her. Also, there is an abundance of animals that I associate with Her, like swans and the geese.
On the other hand, I find it more easy to connect to Thor and the Northern Gods when I’m in my hometown, where They must have been worshipped in the past since we still have a Woden’s Oak. Especially in winter, when temperatures drop to minus 20 degrees and small villages are in danger of getting cut off from the roads, I feel closer to my ancestors’ gods. I’m assuming that I’ll have a deeper connection to Odin in His Wild Hunt aspect when I’ll go back to my hometown in winter (until a couple weeks ago, I’ve shied away from His contact, but that is a topic for a different post). 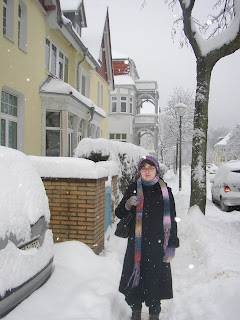 This is me, on a normal winter day in my hometown.
So, are the gods local then? For me, the answer to this question is both yes and no.
Yes in the sense that for me, some places and even seasons are so deeply connected with a specific Goddess/God that I find establishing a connection to Them in prayer is quite effortless. For example, I can feel my matron more strongly in an autumn equinox ritual on English soil, because this is the time and place where I first found Her (or rather, She found me, for various reasons) – connecting with Thor in the same place and time would prove more difficult for me; but He has His own times and places where I strongly feel His energy – just think summer thunderstorms over a field.
But no, the Gods are not local because They will hear your voice and feel your love for Them no matter where on this planet you are. The Kemetic pantheon, in my understanding, does not require you to reside in Egypt to be able to call upon Them and have a close and fulfilling relationship with Them, nor does praying to the Northern and Celtic gods require an ancestry based in the Northern or Celtic countries. Claiming such a thing, for me, borders on racism and is a thought best avoided. However, I feel that certain areas where the Gods have been worshipped for thousands of years are more imbued with Their energy and we might feel Their presence more strongly. So going to England for me is always a bit like coming home, both to a place I deeply love and also to the arms of my Mother.
So what are your thoughts on the matter? Do you have special places that you associate with a certain God or Goddess?
Blessed be,
Harzgeist
All photos ©Harzgeist (Monika Pleyer); do not use without permission by the author of this blog.
Eingestellt von Harzgeist um 10:39