“When you were young
And your heart was an open book
You used to say, "Live and let live"
(You know you did, you know you did, you know you did)
But if this ever-changing world in which we live in
Makes you give in and cry
Say live and let die“ – Paul McCartney: Live and Let Die
A couple weeks ago, my husband found a cartoon on the internet that discussed being pagan from a fundamentalist Christian perspective (the cartoon can be found here, but make sure to shield yourself before looking at it).
It wasn’t even so much the fact that the account was wrong in more than one instance – first of all, initiations work differently, as far as I’m aware, and I assume that not all members of the PBP regularly indulge in role-playing sessions. Getting some facts wrong can and does happen when you’re not overly familiar with another faith (but if you should use your bits and pieces of knowledge for a cartoon is a different question). My problem here is that you can tell that the writers apparently did not take any time to truly understand what it was they were condemning.
This brings me to my topic of today: fundamentalist attitudes. People as the writers of the above cartoon believe that their path is the one and only true path leading to salvation. So if you believe that yours is the only way, obviously you want to propagate the good news and save others – so from your point of view, you’re acting out of love for your fellow humans.
However, what some fail to see is that by proselytising their faith, they are effectively discriminating against adherents of other religions – especially if they don’t try and get to know others’ practices or reasons for choosing their religion.
This shouldn’t be read as a rant against Christianity, however (or, for that matter, against any other religion of which I am not a member). I know many very open-minded Christians, one of them a priest, who’d be willing to discuss your differing positions with you and who’d be prepared to learn more about your faith or lack thereof.
And anyway, it’s not only strongly religious people who can be fanatic, since non-faith-adherents advertise their position quite aggressively, too, as in this bus ad campaign:

Here, the fallacy is that all religious people are necessarily fundamentalists. Obviously we know from personal experience that this claim cannot be upheld. And secondly, referring to an act of terrorism to bring this point across IMO will drive more religious people away from atheist ideas than engage them in fruitful dialogue.
So, for now, we can sum up that when we want to share our religious ideas with others, we might want to
a)      learn about their faith first, so that we don’t accidentally oppose them or insult their core beliefs (and also, seeing that you maybe have some common ground already might make for a better discussion),
b)      refrain from openly advertising very controversial topics because this might hinder a loving or respectful discussion between parties of different faiths,
c)      and, most importantly, be respectful. You’ll get no-one to listen to you when you’re being condescending, belittling the other’s faith or when you’re stressing that you know better, anyway. So think twice before forcing your opinion on others.
Unfortunately, I’ve seen the exact same problem come up in pagan circles. Just to name some examples, there are some Asatrúar looking down on Wiccans who work with the Northern gods in their paradigm, or there are Celtic Recons essentially making fun of new adherents who are attracted to an idea of Celtic spirituality that they do not share or think correct. Some groups seem to forget that everybody started off as a newbie – even the famous Elder Recon, who now looks down on the newbies’ lack of knowledge – and/or fail to see that reading libraries full of archaeological texts before engaging in worship isn’t the right path for everyone. A – more or less – funny summary of “who looks down on whom” can be seen here: 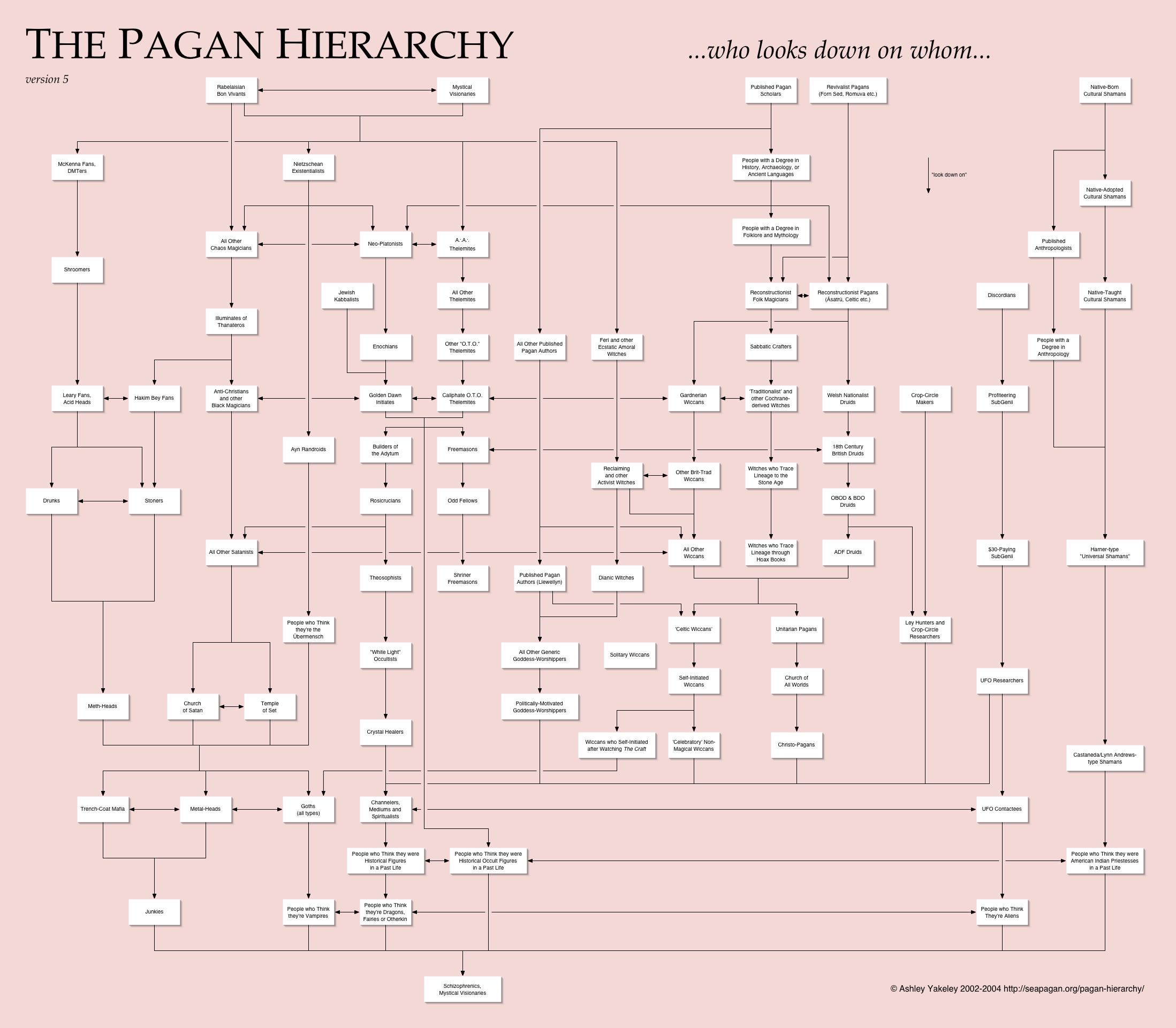 Obviously you’re allowed your own opinion – I, for once, don’t engage in eclectic witchcraft, but I can understand why this would be the right path for others. Especially in a minority faith like ours, we should be more accepting towards other branches so we can make a stronger impact on the public – not to proselytise, but to make our religious demands known (e.g. concerning our sabbats being recognized as holidays).
In the end, I believe that there is more than one way to find the Gods, and within this way there are multiple smaller paths that one can choose to walk on; and all these different paths are valid for the people walking them. I’m just terribly annoyed by people of any faith claiming that other paths (or for atheists, that all paths) do not actually exist or that theirs is the best one. So I’m hoping for more understanding and getting to know each-other in interfaith dialogue so we can all let each other live our respective (non-)religious lives.
Blessed be,
Harzgeist