For my second F post in the PaganBlog Project, I’d like to address the question of how we pagans find the deities that we pray to and worship.
It seems that there are several ways in which worshippers find their matron or patron gods.
But before we start on those, remember that you don’t have to have a certain deity you follow to be a pagan – some practitioners took years to find theirs, and others are quite happy working magic or walking a pagan path without belonging to a specific goddess or god. So don’t stress if you haven’t yet connected to a certain deity.
So, now on to finding your deity:
One way of finding your deity is by research, so to speak. Some have always been attracted to a specific culture or pantheon, and reading the myths they find a goddess or god that speaks to them. If that is the case with you, you can start to worship Them by leaving offerings, and (hopefully) slowly form a deep, fulfilling connection to this deity.
So, for example, somebody who works in a healing profession might easily connect to Brighid, as well as a poet might seek Her inspiration or “fire in the head.” I also felt drawn to Persephone from childhood on, as I loved my book of good-night-stories that also included Her myth. Eventually, I found out that another goddess was responsible for me, so to speak, which brings us to our next point. 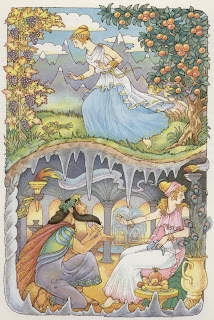 an image of Persephone, Demeter and Hades from my favourite children's book
There are some within the pagan community who are simply found or claimed by a deity. Sometimes accepting this claim is not easy, since you might not have expected this specific deity to have an interest in you. Usually you’ll know when a deity claims you – connections with this deity seem to pop up everywhere you look, you’ll be visited in a meditation, or you’ll feel what some describe as a distinct “spiritual slap on the head” by the deity, telling them that they are Theirs. Essentially, this is how I met my matron, Anann (Who I used to mistake for Persephone, since She is also connected to the earth and to death). Why She chose me I cannot fathom, but I’m sure I’ll find out one day what work She wants to be done.
Sometimes it can happen that despite everything I’ve just said, you fail to notice that a certain god or goddess is trying to get your attention (although once you realize it it’s usually glaringly obvious). As a general example, a pagan might get followed by ravens all of a sudden (especially in places or times of the year when there shouldn’t be as many ravens about), at the exact time that they feel compelled to start practicing martial arts, and only after a very long while realize that the Morrighán is calling them. But if you’re involved with a pagan community, telling your fellow pagans about coincidences like these will usually get you pointed in the right direction quite easily.
I should mention here that sometimes, people will be called by a god or goddess Whose lore hasn’t survived, but since I don’t have any experience with this myself, I won’t stress this part here (if you are familiar with this, however, I’d love to hear about your experience!).
And then, there are situations when you might perfect well realize Who it is that’s calling, but are unwilling or afraid to form a connection. In my opinion, this is the most difficult outcome. Not seeing a connection, obviously, can happen sometimes, but I’d be cautious if I’d wilfully ignore a deity.
However, I guess that it depends why you’re ignoring Them. Did you hope for a different deity of the pantheon to contact you and be your matron/patron? Or, let me put this provocatively, is this specific deity not “fancy” enough (as in, everybody worships Brighid, so why do I get called by Donn)? Or do you shy away from forming a deeper connection because of, how shall I say, reverence?
For me, reverence for Odin was what kept me from approaching Him for the last 10 or so years (boy, do I feel old right now!) – that, and not knowing how to approach gods, since the internet and books on paganism hadn’t really made it to my little hometown in the late 90s. 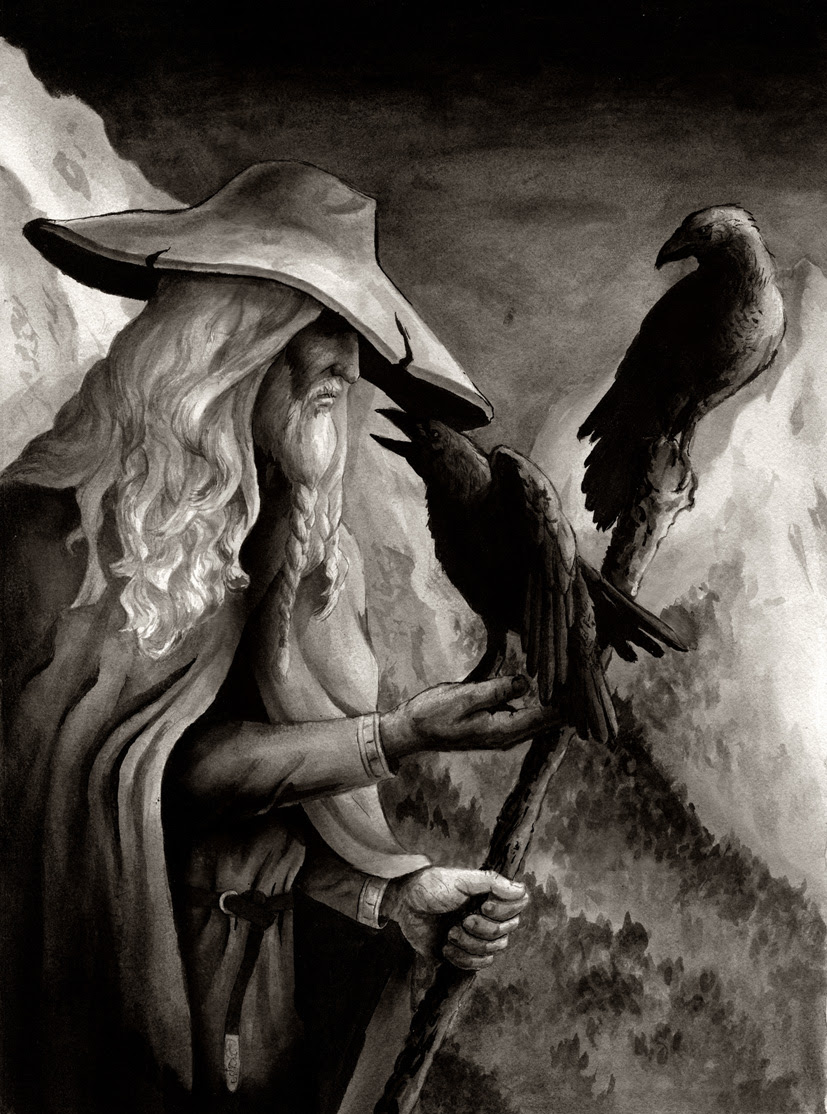 It was only lately that I realized how many connections to Him are basically staring me in the face.
First of all, I am an academic, currently working on my PhD, so it would only be fitting to start a relationship to the god of wisdom and knowledge. Then, Odin is also a god of poetry Who gives the mead of inspiration and creative fire – I see myself as a writer, and my greatest dream is to be a full-time writer of horror and crime fiction.
But there are also other, perhaps less obvious connections. For example, the number 9 has always been my favourite number. Using a number oracle that I believe originated in the Kabbalah tradition (I’m not really sure anymore where it came from; I noted it down in my book of shadow-of-sorts about 12 years ago) my name number as well as my birth number are 9 (and if you combine those, you’ll get your fate number, which is – you guessed it – 9).
Then, I love the colour blue. My room as a teenager was completely blue; the carpet was a deep blue, the walls were light blue, the curtains were blue, and my bed was usually covered in deep blue sheets. Unfortunately, there aren’t any pictures of the room without 15-year-old me (with a weird 80s Jon Bon Jovi hairstyle) in it, so you’ll have to use your imagination ;-)
And I also love the colour black – basically, most items in my wardrobe are black (apart from jeans and the occasional green, blue or red items; and no, I never was a goth) – both colours are associated with Odin.
In my teenage years, I also developed an interest in the military. I read all the books my grandpa had on the military and important wars (and I tried to write an abysmally bad story set in the Vietnam war, which thankfully I abandoned), and I still enjoy war movies like Full Metal Jacket. Considering that Odin is a god of battle, this is quite a fitting interest.
And then, I had one of those new age cassettes (yes, an actual cassette!) with wolves howling in a storm. And I love the time between Christmas and New Year when the Wild Hunt is said to pass over the Harz mountains.
So I’m wondering if it is fate that led me to Him in the end? I’m still trying to figure out what He could possibly want from me, but I believe that time will tell.
So how did you meet the deities you honour? Or does your practice centre on other elements apart from deity worship?
Blessed be,
Harzgeist
Sources:
Persephone image taken from:
Yeatman, Linda. 1985. Bedtime Stories. [German translation, titled “Die schönsten Geschichten zur guten Nacht” by Eleonore Melichar]. Wien: Ueberreuter. p.51.
Odin image: http://silverbough.webs.com/Images/odin2.jpg
Eingestellt von Harzgeist um 14:10