A lot of Pagans I’ve encountered like to give offerings to our Gods – some offer physical objects, like wine and mead, some offer crafts they’ve created, like altar cloths, and some offer their talent, like singers. Being a writer, I do the latter.

When you’re working in a creative field yourself, maybe you’ve also felt this sudden pull to take that notebook or sketch pad and paint or write down this unexpected new idea. Perhaps you – just like me – have wondered where these ideas, this art of ours comes from. 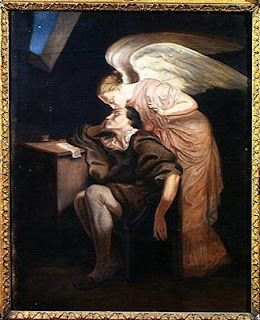 Clearly, some of it is inspired by other works of art I encounter. When I was still at school, I read a lot – about one to two novels a week. Today, I don’t have as much free time, but I still try to read as much as I can, at least the new works of my favourite writers. And I attend a Creative Writing course once a week, where I can present my writing, get feedback and also get new ideas. But one question still remains: Where does this divine spark to create something new come from?

I like to think about this in terms of my muse (cf. King 2000): He lives in an old, run-down changing room in a theatre (don’t ask me why he likes to hang out there; but I’ve never seen him anywhere else). He looks a little like Jim Morrison, with wavy brown curls, and always wears a white v-necked shirt and faded blue jeans. When he helps me out with a story, I pay him in whiskey or similar hard alcohol. But I have to keep up my part of the bargain – when he sends me that inspiration, I have to write it down and acknowledge it, even if it means getting up at 3am and searching for a pen and notebook. 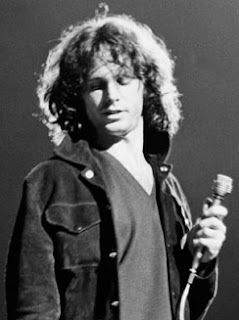 You could say that when I’m talking to my muse, what I’m essentially doing is talking to my own subconscious which, for some unfathomable reason, likes to dress up as Jim Morrison’s look-alike. But be that as it may, I wonder how our Gods feature in this process. After all, Odin grants the mead of poetic inspiration; in the Celtic pantheon, Brighid is associated with the “fire in the head” of inspiration (also see my B post on Her). However, when I’m writing I’ve seriously never felt Their presence, even if the work I produce is about Them.
So while I see writing as an integral part of myself (hence the Identity title), I still don’t know what makes me, or rather, what drives me to write. What I know, however,  is how to write and how to be inspired.

So how can we make inspiration flow (cf. Myers 2008: 477)?
To finish off this post, here’s a poem about Odin I wrote recently. It is inspired both by the German Symbolist poet Stefan George (if you can read German, his poem is here) as well as German Expressionist writers, esp. August Stramm.

unannounced I came
but receive me,
my king,
in your court
in the twilight woodland

others handed you roses -
but my flowers are wild
and free, like the sun
that is dying

this final blossom
autumn-blue
take, bind it,
braid it in my hair -
with your nine sacred herbs
a crown
to make my wedding holy

skies darken, blacken in the wind
autumn air dances
in your war-encrusted curls -
please, leof min,
stay with me
for it is towards evening

silently
beneath the dusk I hear
your laugh,
the night,
the cruel blue winter wind -
and the Wild Hunt
is coming